WOW’s Easter 2019 production of Chitty Chitty Bang Bang at Weymouth Pavilion broke recent box office records for WOW. It was a big hit with audiences with over 4,500 tickets sold for the six show run. Many also gave five star reviews on WOW's Facebook page. This included several who had never seen a WOW production before as in the following comment: "It was the first WOW performance I have seen. I have to say how amazed I was! an absolutely brilliant show that Dick Van Dyke would of been proud of! Well done to all. I will certainly be looking out for more of your performances." 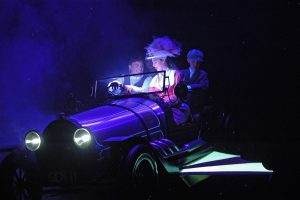 In her review for the Dorset Echo, Marion Cox called it a "musical in a million" and went on to say that, "The music and dance numbers and the terrific performances of the large cast are all that matter in a show that demonstrates the talent of every member of WOW both on and off stage."

WOW's area representative from the National Operatic and Dramatic Association (NODA) was equally impressed and Sylvia Coates opened her NODA Show Report with "Superlatives abound, but there just aren’t enough to describe WOW’s latest production. With a level of determination and sheer professionalism to envy, WOW transported the audience to a magical and comical world which everyone should visit at least once."

WOW Chairman, Alan McKechan, said, "The superb performances of the entire cast are down to the creative team and in particular our exceptional director and choreographer, Martine Burt. She is also a great role model for the teamwork that underpinned every aspect of the staging of this show. The Show Programme for Chitty gives an indication of the huge team people who also made a massive contribution to the success of this production."

WOW selected 10 younger children to join WOW for this production to play the children's ensemble. One of these, Connor Wheeler shared the lead role of Jeremy Potts. Seven of these children have since successfully auditioned to become full members of WOW and are rehearsing with the group for November's WOW Show. This compilation of song and dance from stage and screen will showcase the depth of talent in the group.