WOW’s April 2018 production of Footloose has received a nomination from NODA South West in the category of ‘Youth Award for Company Characterisation.’ WOW Chairman, Alan McKechan, said, “I’m delighted with this nomination, as it recognises the excellent work that our director, Martine Burt, does to ensure that everyone acts and reacts in every scene, whatever their role.  The whole cast deserve great credit for carrying this through so effectively into their performances.” 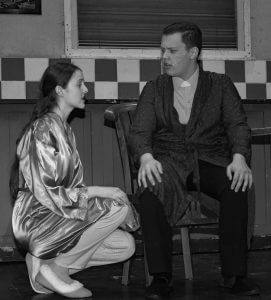 Local NODA representative, Sylvia Coates, notes the strong characterisations in this extract from her show report:  ‘Vi Moore (Georgina Mason) portrays the stifled clergyman’s wife perfectly; Reverend Moore (Harry Lake) is hiding from himself, which makes finding his character a real challenge, so full credit for achieving this; the final scene between Vi and Reverend Moore touches the heart, as they come to terms with love and loss in a mature performance;  Ren (Luke Southorn) avoids swagger and conceit to find just the right amount of youthful vigour in playing the bumptious but likeable city boy in the country; Ethel (Paris Higson) is a controlled and pragmatic mother;  Ariel (Molly Thorne) flits delightfully through Bomont, and as the boys fall under her spell she causes mischief and mayhem in her quest to be free; thuggish yokel Willard (Samuel Bates) transforms convincingly into an affable suitor and even a dancer; bully Chuck Cranston (Alex Rogan) is horribly believable; Rusty (Maggie Ayles) is simply sparkling, bubbly and irrepressible.  WOW’s strong ensemble (too many to mention) made the most of every moment to create and maintain the characters who add depth and context to the action.’

Winners will be announced on 16th March at the NODA SW Awards Evening in Plymouth. The full list of nominations is on this link. Martine Burt is directing and choreographing WOW’s April 2019 production of Chitty Chitty Bang Bang.