WOW is excited to be bringing three smash hit West End musicals to the Pavilion stage. First up, this November, is Cats to be followed by Chitty Chitty Bang Bang next April and Shrek the Musical in April 2020. 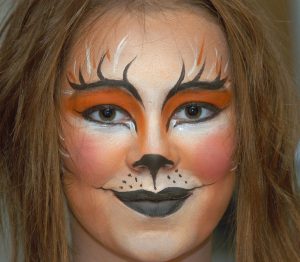 WOW started rehearsing Cats in May with Musical Director, Heather Reed and just before the summer break makeup artist, Sophie Anders, led a special makeup workshop. The show’s director and choreographer is Jeremy Tustin and his creative vision will see the fabulous feline characters telling their stories through song and dance against the backdrop of an abandoned theatre. Based on T. S. Eliot’s Old Possum’s Book of Practical Cats with Andrew Lloyd Webber’s stunning score, including the hit song ‘Memory’, it is one of the longest running shows in West End and Broadway history.

Chitty Chitty Bang Bang, next Easter, will be one of WOW’s most ambitious productions with the need for a flying Chitty car. The stage musical premiered at the London Palladium in 2002 and is the longest running show ever at the Palladium.

The 2011 West End production of Shrek included former WOW member, Kerry Hawkins (née Winter), in the cast. When asked about its suitability for WOW, she replied enthusiastically, “Shrek is an absolutely perfect show for you to do. There are lots of brilliant ensemble numbers with fab harmonies and dance routines.”

WOW President, Janet Stockley, said, “We are thrilled to be presenting these fantastic shows right here in Weymouth. With our highly talented cast and professional creative teams we know we can deliver great entertainment for all the family.”

Martine Burt will be returning to direct and choreograph both Chitty Chitty Bang Bang and Shrek. Several of her previous productions with WOW have won regional awards, including for Outstanding Choreography and Best Youth Production in the South West.